AI War:Vengeance of the Machine 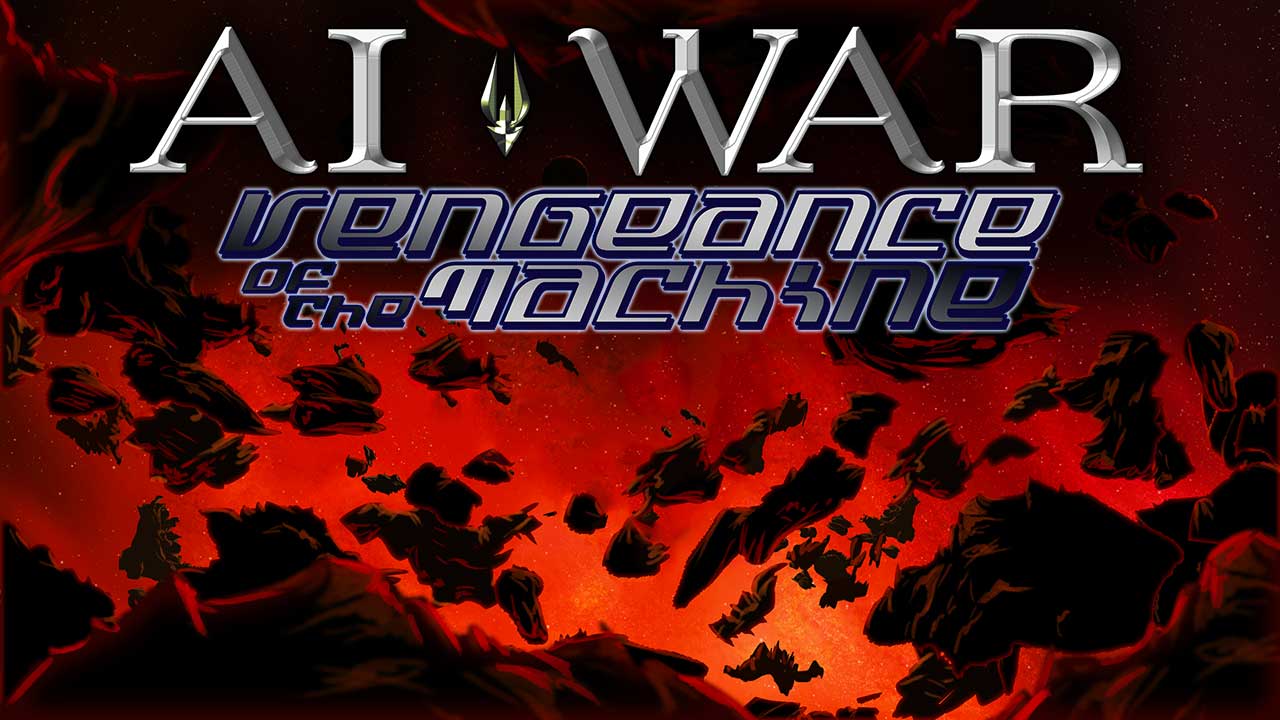 What exactly is added in the Vengeance of the Machine expansion?

A: This expansion gives players some fun new toys but focuses on adding still more variety to your main opponent: the AI. There's already a ton of that variety, but our community is very excited about the new stuff VotM brings to the table, including "Dual-type" AIs, Dire Guardians, AI Planetary Subcommanders, and the "Hunter" and "Shark" AI plots. There are also new bonus ship types, AI types, map styles, core guard posts, guardians, core turret controllers, and more awesome music from Pablo Vega. The expansion also adds a new "Showdown" option that provides a brand-new way to win (or lose) in the form of an ultimate stalemate-breaker. This expansion is slated for official release in June 2013.

Now you may optionally assign a secondary type to each of the two AI players so you can see what it's like to play against a Speed-Racer/Thief and a Spire-Hammer/Neinzul-Youngster (answer: the former is quite amusing in a morbid sort of way, and the latter is _rather_ challenging).

You can also use it to "mix in" some of the new AI types like Chivalric and Bouncer to make the game perhaps a little easier in some ways, while still getting the distinctive features of the other types chosen.

Now some of each AI's planets (mainly picked from the MkIV and Core ones) will have a "subcommander" represented by one of 10 new special command stations (like "Gravitic", "Translocator" and "Lance"). Most subcommanders can also pick from some of the 11 new special guard posts (like "Plasma", "Implosion", and "Widow") and most also try to be extra clever in how they place their station and guard posts.

The "Knife Fighter" subcommander, on the other hand, will pick from short-and-medium range combat-oriented stations and posts and try to place them so as to cover all its wormholes with overlapping fields of fire.

And so on, with types like the long-range-favoring "Lobber", the tractor-and-gravity-loving "Obstructionist", and the ever-popular "Rude Gesture" (who is not at all happy about no longer being able to stack 13 counterattack posts on its planet, having to settle instead for 4).

Guardians in general are scarier than they once were, but we've also added much nastier versions called "Dire Guardians" as new "heavy-hitters" in the AI's toolbox, specifically:

Normally you'll only encounter these through a few "Dire Guardian Lairs" seeded in each map (unless you disable them in the lobby). Each lair is normally not a problem... until its planet goes on alert. Then it starts building a Dire Guardian inside. You're warned when these are building and you'll want to be ready to take it down (not easy, but doable with major fleet action) when it spawns. For some lairs you'll probably want to deal with them permanently at some point, and you can do so by destroying them. But destroying them releases a one-time spawn of _three_ Dire Guardians. Ouch.

If you have any "Exogalactic Attack" sources on (Fallen Spire, Broken-Golems-Hard, etc) then Dire Guardians are also eligible to seed in those. They're only one step below Hunter/Killer units in cost so it's not really making exos any more dangerous overall in terms of raw strength, but it does add more variety and thus more potential for picking a "killer combo" that your defenses will be hard-pressed to withstand.

Like all Core Guard Posts, these only appear on AI Homeworlds.

Part of the base-game work during the post-6.0 development cycle made guardians a more variable part of the game by having each AI start with 3 guardian types "unlocked" and gradually unlocking more as AIP increases, rather than having all AIs have all guardian types all the time. In this expansion we're further increasing this new variety by adding the following guardian varieties:

These are capturables quite similar to Fabricators (which allow you to build a specific MkV ship type), but instead allow you to build a specific type of MkV turret. The other big twist is that these MkV turrets have PER-PLANET caps, instead of galaxy-wide caps. So if a Core Spider Turret Controller gives you a cap of 24 MkV spider turrets, then in theory you can build 24 MkV spider turrets on every planet you own (and all planets adjacent to those, as you also have supply there). In practice you generally won't be able to (or want to) spend _that_ much energy (or potentially metal or crystal) on turrets but either way this gives you much more flexibility for distributed defense.

This is probably the biggest single feature of the expansion, and it provides another way to turn the normal "Guerrilla War" into a "Frontal War". Like Fallen Spire, to win by Showdown you'll need to withstand a truly tremendous AI attack. Unlike Fallen Spire, you can start the final confrontation simply by capturing four specific planets (the ones with the "Showdown Devices"), and that confrontation only lasts about 30-40 minutes (less, if you're unsuccessful).

We hope many of you enjoy devising new strategies to deal with the particular challenges of winning (or losing) via Showdown.

Every Man for Himself.

Vengeance of the Machine.