Nota Bene: These instructions are entirely out of date and are preserved only for historical interest.

These instructions were written in Late June and correspond to AI War 2 version .502 or so. There is now an in-game tutorial, so you should look at that.

This is intended as a brief "How to begin a new game". Just enough to get someone started, from before when the in-game tutorial existed.

Start the game, then click "Start New Game". Pick the Map Type and then look at the pair of columns of the screen. The left column is Special Factions (Dyson Sphere, Nanocaust, etc) you can start with. For a first game, I recommend disabling all of them. The right column has an option called "Start With First Planet"; make sure this is set to "On".

Once in game, first thing to do is to get your starship constructor going. Hit the "B" button to toggle through your Build Units (here there are 3; the Ark, the Starship Constructor and the Planetary Controller). Select the Starship Constructor, then click "Rally" and then "1". This will rally all your starships to the ark from the controller as they are built. Then start building some starships. The Ark will automatically start building a complement of Fleetships.

Once your ships are all built, take your fleet out and start fighting the AI!

This walkthrough is very basic, and does not end well, like many other parts of the current alpha.

When you run the game you should see a screen like this: 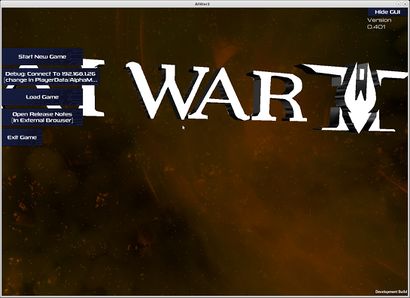 This is the main menu. Click the "Start New Game" button. You will then see something like: 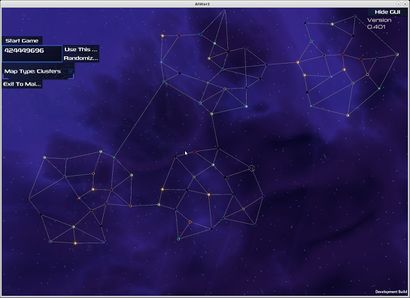 This is the game setup screen, which is very similar to the lobby in the first game, except it's closer to the actual game and thus easier to maintain for us and it's kinda cool to go zooming around the galaxy map you're about to get splattered all over. You can use the scroll wheel to zoom in and out, and the "Map Type" dropdown to choose the style of map. Also, clicking on a particular planet will have you start with your ark on that planet (you'll see a small circle over the planet to let you know you've chosen it).

Click the "Start Game" button, which basically just "unpauses" what's already on your screen and brings you in to view your Ark. 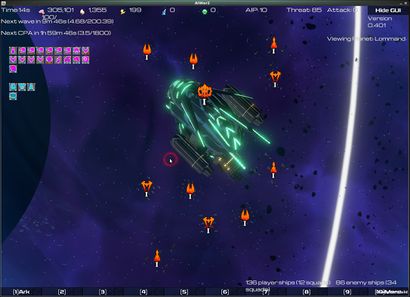 This is the planet view screen, centered on your Ark. Note that it is already set up to produce your triangle (Fighter, Bomber, and Missile Frigate) ships. You'll need them to defend yourself, as even your "starting planet" is AI-controlled at first.

Later on we may have it not start off automatically producing stuff, so that new players don't get too far into the game without knowing how to set up a build queue, but we'll see what the best way is later.

Zoom all the way out (mousewheel should work, or you can use page up and page down for zooming). Then pan using WASD so that most of the "gravity well" circle fits within the screen: 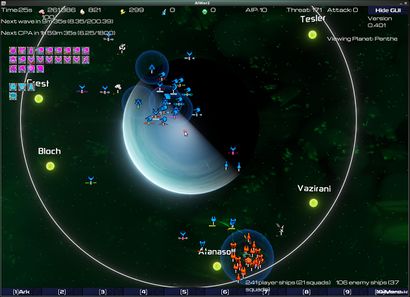 This is basically everything on the planet. Most of what you see are enemy ships/turrets, all set up to defend the Planet Controller and Warp Gate: 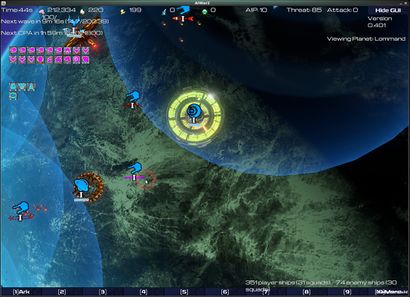 The spinning green object is the warp gate AI Warp Gate. The brown circle near it (looks like it has horns) is the local AI "Controller", like the Orbital Command Station from the first game.

To fight the AI here, use your mouse to select all your ships, and use them to destroy the defenses. A "Hit and Run" style is often a good idea, where you destroy a chunk of the defenses and then retreat to the edge of the gravity well to rebuild all your ships. Often destroying the roaming guardians before you attack the static defenses is a good idea as well. Once you've weakened the defenses enough, hit "1" or click the "Pursue" button, and your units will automatically go forth and destroy the remaining defenses on this planet. Pursue is equivalent to Free Roaming Defender in AIWC.

Your units will not actually attack the controller, however! This is because destroying it will increase your AIP. To tell your units that you actually want to capture this planet, you need to flag it "Try to capture: On". To do that, we'll need to use the main menu. To do that, click on empty space to clear your current selection. Then hit "0" to bring up the menu, then "5" to enter the Planet Menu, then "1" to enable "Try to capture: On" 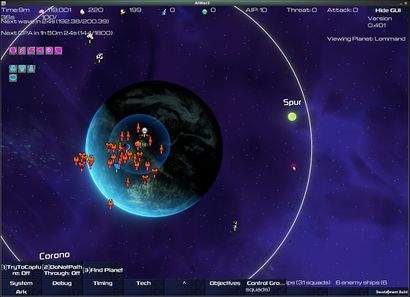 Congratulations, you have conquered the planet! Your Ark will automatically capture the derelict controller and together they will claim the local resources for you. Right now this process is _very_ automated and may be too much so. On the other hand, you're probably more interested in strategy, logistics, tactics, and seeing things go boom than you are in giving explicit "claim everything on the planet" commands. We'll see.

Before you move on, you'll want to build some kind of defenses here to hold the planet against AI attack. 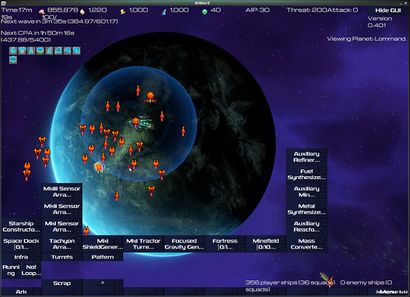 This will bring up the controller's build menu.

This will show the "Basic Turretry" button. Click on it. 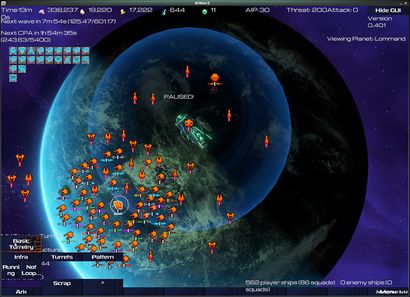 See the number next to the lightning bolr at the top of the screen? That's the Power, aka the population cap for local defenses (it doesn't apply to your main military fleet, that's handled by galaxy-wide "Fuel"). Executing the Basic Turretry pattern just runs a simple algorithm that builds as many turrets as it can within that power budget, from a variety of the types of turrets you have unlocked, in the available space near the unit that you executed the pattern from.

By the way, the Basic Turretry pattern is implemented in external code, you can read it in (game directory)/AIWarExternalCode/src/BuildPatterns/BasicTurretry.cs , and if you want to change it or add additional patterns you can do so: Modding Instructions

Again, lots of automation here, perhaps too much, we'll see. But in practice, you would generally want to put more thought into this. For one, you'll want to reposition your Controller before building its static defenses. Unlike the Orbital Command Stations in AIWC, the Controller can be moved around the local planet (but never through a wormhole). Turrets are still completely immobile, however.

So this is really easy, right? Let's take the fight to the AI. Select all your mobile military again, and tab to the galaxy map. 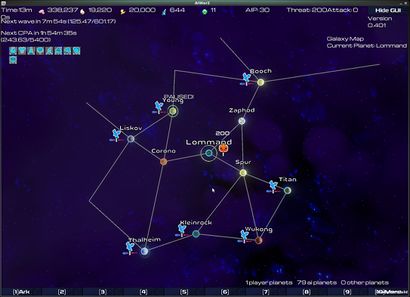 You may have noticed that, unlike AIWC, you can't see the whole galaxy map at the beginning of the game (though you can in game-setup, currently). It works a lot like the "do not show unexplored planets" option from AIWC. We may or may not stick with this, but it seems pretty interesting and is good for the sense of progression throughout the game.

It's not entirely like "do not show unexplored planets", however, in that you don't actually have to visit each planet to see it. The rules are basically:

So to expand your knowledge of the galaxy you don't send out hordes of scouts, you send out military strikes to take down the scramblers. Later you'll also be able to hack scramblers to turn them to your advantage, but that's for another day.

In the screenshot above I've marked a planet with a scrambler (mouseover the little green cube to bring up the lower-left tooltip that tells you what it is... did I mention placeholder stuff?).

Find a similar planet in your game, and (with all your ships selected) right click that planet.

This is the planet with the sensor scrambler... Oh, I didn't really pay attention. This is a Mark _4_ planet. Um, oops.