I am the last of the murdered race of Hydrals. My countrymen were the dictators of the solar system, so we kind of had it coming. Yes, that is me above. And you are me. This is our story.

The Hydrals are an extinct race in The Last Federation. Their death galvanizes the protagonist, now the last member of the race, into pursuing peace in the solar system one way or another. 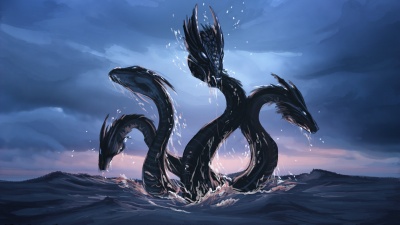 The Hydrals were one of the oldest races in the solar system, and the first to attain spaceflight. They used their technological advantage to prevent the other eight races from reaching space, destroying any manned space launches from their planets. They justified these actions by depicting each of the other races as too dangerous or unfit to be permitted interplanetary agency. One of their number objected to the practice and stole the knowledge of spaceflight along with a ship, intending to play Prometheus to the other races.

The Evucks secretly used probes with advanced technology to dry out the Hydral homeworld, a water planet. The Hydral population plummeted from 40 billion to just a few thousand as a result, and the survivors assembled in space for a retaliatory attack. Shortly thereafter, however, a moon launched by the Acutians struck the planet, destroying it and killing all the Hydrals. Only the protagonist survived, crash-landing on a planet belonging to one of the eight races (which one is determined by the player at the start of the game).

Taken prisoner, the Hydral carefully concealed his strength until his captors achieved spaceflight. Once that was done, he escaped, stole the prototype flagship, and set about forming the Federation.