Valley 1:What are all these maps for?

A Valley Without Wind offers a vast set of tools and maps to help you explore Environ in an efficient manner. This guide will help you to learn how to use these tools.

The Hierarchy Of The World

It's helpful to understand how the world is organized, and what terminology is used.

Each world of Environ is unique. You can call your world whatever you want in order to be able to find it when you have multiple worlds, but each one you create represents an alternate reality of a single world called "Environ." In AVWW, the world of Environ is infinite (or at least so unbounded that nobody could reach the end of it within a human lifespan).

The world is divided into continents. Each continent is being oppressed by an overlord and that overlord's lieutenants. Saving one continent by killing its overlord will reveal the next continent on the world map. Each continent functions as a "New Game+" option does in many other games: letting you carry forward your inventory, enchants and unlockables, but not your spells themselves.

Each tile on the world map is a region. With a very few exceptions (deep sea tiles and ports), any time you press the Confirm key on a region tile, you will enter the main side view action-adventure mode. A single region can be infinitely large thanks to its cave systems. Also it's worth noting that the main surface area of the region is really only a part of the region; when you do missions, you'll find yourself in parts of the region that are only accessible for the duration of that mission.

There are three kind of dungeons: surface/exterior, interior/building, and underground/cavern. It bothers some folks that we call the surface of a region a "dungeon," and certainly in the classical sense of the word that's a misnomer. But in the world of video games it's very fitting, especially considering the nature of our surface dungeons.

The actual area you are in when you are wandering around in side view is known as a chunk, because it represents either a chunk of an exterior environment, a chunk of an underground cave, or a room in a building. In buildings we tend to just call them rooms, but sometimes when referring to the dungeon map we refer to them as nodes in the map. Sorry about any confusion there. 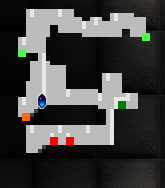 Use the minimap in the top left to get around when you are in a room, cave, or outdoor area.

Any greyed-out sections have not been explored, and will be revealed as you near them.

This map can be found in the bottom right corner of the screen. The term "dungeon" refers to a group of surface areas, the interior of any building, or a cluster of caverns.

While playing, you can hover over any part of the dungeon map for more information.

This map represents the relationship between rooms in buildings. Each rectangle is a room, and a rectangle directly above another means that there is a connection between them. A rectangle being above another one does not mean it is on a higher floor -- only that it is further from the entrance.

In buildings, the bottom-most node has an exit to the outside; in underground caverns it's always the top-most node; and in surface dungeons either the rightmost or leftmost node leads to the world map.

This is used to represent the relationship between rooms in a building. Each rectangle is a room. A rectangle directly above another means that there is a connection between the two rooms (usually a door). The diamond outline shows you what room you are currently in, a smaller, blinking diamond will appear on the map when you are standing in front of a door showing you the room that that door leads to. A rectangle being above another one does not necessarily indicate that it is on a higher floor, only that it is deeper into the building, the bottom-most room will most likely have a door to/from the outside.

The blue crystal shows you what room you are currently in. If you are standing next to a door, a smaller blue crystal will show you the room the door leads to.

Always be sure to hover over nodes to get details on what they contain, but each color has a different meaning:

Other features of interest:

There is also a keybind for showing this map at any time, but as that is not generally needed it is unbound by default. 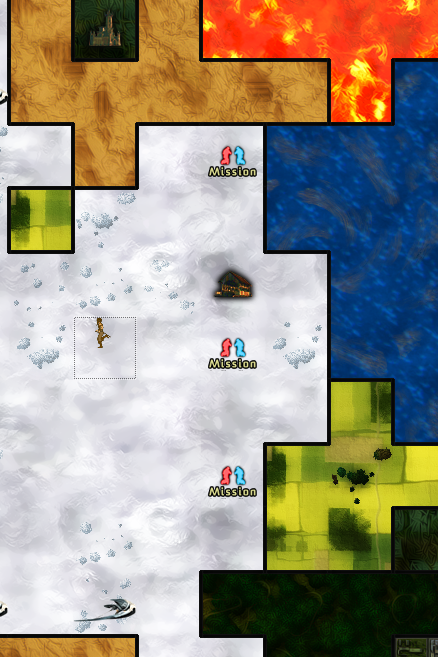 This is the overland map, it will not only show you the types of regions you can enter in your world, but it will let you know about the important features in each region.

For example, moving your character to one of the mission squares on the above map might bring up a box similar to the one below in the left hand corner of the screen, telling you all the information you need to know on the mission in that region. Even when no missions are available in that particular region, moving onto a particular square will reveal a lot of information to you that should be helpful.

What The Heck Kind Of Map Is That!? (Dungeon/Region Maps)

We get this reaction, sometimes, from folks who have never seen a graph-based representation of this kind of data. Here's the deal: we're representing a 3D building in 2D space, and some of these buildings can get quite large. So what you're seeing up there is technically a graph, not a map, in the mathematical sense.

Here's What The Graph-Style "Maps" Are Good At Showing You

A graph-style map is incredibly compact, and is excellent for showing you certain kinds of data that you need. Specifically:

Here's What The Graph-Style "Maps" Don't Show You At All

Despite their benefits, there are a few key things to understand about what a graph-style map does not tell you:

A Valley Without Wind