NPC battles are engagements on the solar map between two races. They generally come in three forms: battles in open space, outpost attacks, and planetary invasions.

Each solar day, during a battle:

Armada strength is improved by the Space Power techs, higher Mark level ship techs, and the God Mote ultimate tech, with bonuses applied multiplicatively. Mark VI ships are inaccessible to Andors, Boarines and Burlusts, and Mark VII ships are exclusive to the Evucks and Skylaxians. Certain racial abilities such as Boarine rage momentum and Burlust turmoil can also increase strength.

Planetary Ion Cannons will fire at any hostile armadas in orbit.

When two hostile armadas meet, they may engage in a battle in open space. Two fleets enter, one fleet leaves. These are not generally of strategic significance.

When one race dislikes another (less than -10 attitude), it may send armadas to attack the other race's outposts. This is a provocation that often leads to all-out war.

When the attacking armadas arrive at the target outpost, they will first engage any defending armadas present. Any surplus attacker armadas will have to wait in line. Once there are no defenders, the attackers will begin destroying the outpost (after they have spent enough time orbiting it), which will usually take several days. There is a 20% chance that the outpost will be captured instead of destroyed.

Player-owned outposts will resist attack with security goons if any are available. These can kill weak attackers, and buy time for the player to directly intervene to defend the outpost.

These are the largest and most important NPC battles in the game. Success here will result in a planet changing hands, and possibly the destruction of the conquered race. 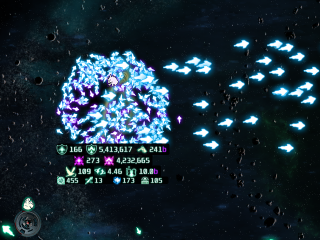 Skylaxians launching a large-scale attack on a Boarine planet. No ground troops have been deployed yet.

The attacking race will assemble armadas and troop transports (if applicable), then fly to the target planet.

Planet attack events are announced as an event notification. Usually, several solar months elapse between the announcement and the actual movement of ships.

When the attacking fleet gets to its target, it will first engage any defending armadas present. Any attacker armadas not engaged in combat will bombard the planet (after they have spent enough time orbiting it). Honorable races (Andors and Skylaxians) do not conduct orbital bombardment.

Bombardment reduces a planet's population over time, and caps its natural birth rate is capped at the natural death rate (before bombardment effects), so its population can only go down, not up. Bombardment may also randomly destroy buildings.

Bombardment strength is based on the attacking fleet's strength. This is further modified by a series of five techs under the Orbital Bombs category: three with a 1.2x bonus, one with a 1.3x bonus, and one with a 5x bonus (for a maximum cumulative bonus of 11.232x). Peltians have access to a further three techs with a 5x bonus each, for a further cumulative bonus of up to 125x (giving a maximum bombardment strength of 1404x the base value).

During an invasion, the planet will devote all its resources to building and reinforcing defending armadas (split evenly between each). The attacker will, in turn, send new armadas it builds to reinforce the attack.

Ground combat occurs when the attacking race lands its troop transports on the planet, but cannot proceed until the defenders have no more than 50 base armada power or the attackers have 50 times the defender's effective power. Each attacking armada can deploy up to 10 million soldiers. Once troops are landed on a planet, they remain there until one side wins or a truce occurs.

Each race has a base ground combat strength, which is further augmented by a number of techs, primarily under the Ground Military Power category. The base soldier strengths by race, as of version 1.022, are:

Civilians also participate on the defending side, although they only have 1/10th the strength of soldiers. Acutians do not have civilians distinct from soldiers. Andors do not have soldiers.

Peltians do not invade with troop transports. Instead, they use suicide pods, which enable their troops to trade with the enemy 1:1 regardless of target.

When the planet loses enough population, it may surrender, converting the survivors to prisoners and/or resistance fighters, or it may fight to the death. Thoraxians do not take prisoners. Andors cannot capture planets, and will instead sign a ceasefire with the defending race (If it's still alive at all, of course. Andors will capture as normal if attacking Thoraxians or another race that always fights to the death).

The rules for determining who gets the planet are:

The new owner occupies the planet with a population of 1 million. RCI values are reset to a near-zero baseline.